In the latest move by an L.A.-based real estate firm that’s been buying up properties across downtown Worcester, a historic Chandler Street building will likely be demolished before too long. In October, Benedict Canyon Equities submitted a request to demolish 27 Chandler Street, a 35,000-square-foot building constructed in 1890. The matter is up for consideration by the Worcester Historical Commission at its next meeting. 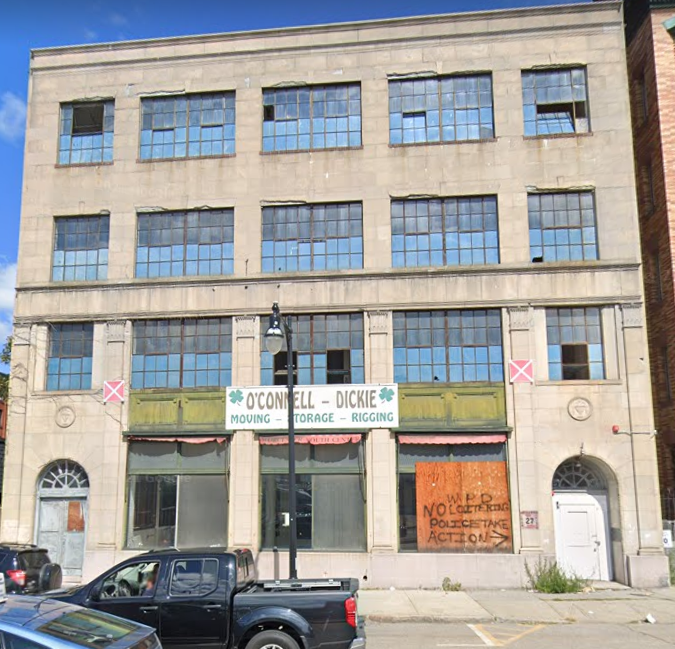 Known as the Hovey Laundry Building, the property at 27 Chandler Street was a steam laundry facility for many years. Since its construction in the late 19th century, several additions have been made. In the late 1970s, the building was sold to Edward A. Dickie & Sons, a moving company owned by Mary O’Connell. The original sign, which partly states “O’Connell-Dickie,” still hangs on the structure.

After going through a foreclosure, the property was sold two times before being purchased by Benedict. The firm acquired the property for $1 million in January 2020 and, until submitting the application for demolition last month, had made no additional moves on the site. The real estate firm, which specializes in multifamily real estate, made waves by purchasing the Sky Mark Tower in 2019 for $29 million. Since then, it has acquired several other properties around the building, the tallest residential tower in Worcester. Benedict Canyon Equities is owned by Bob Hart, an alumnus of Worcester Polytechnic Institute.

The property at 27 Chandler Street abuts the Vendome and Saint Ives apartment complex, located at 17-19 Chandler. In October, the 44-unit complex was sold to a pair of real estate agents from Wayland for $3.4 million by Menkiti Group. Plans for those structures have not been released yet, but it’s entirely possible that they could also be put on the demolition block by developers.

As for the former Hovey Laundry Building, its fate rests in the hands of the Worcester Historical Commission. However, odds are good that the commission will approve the request since the building is not in very good condition. Indeed, its exterior is marked with prominent red and white “X” symbols, designed to alert first responders that it’s unsafe to enter in the event of a fire. In its demolition application, the real estate firm stated that the existing structure offered no economical uses, suggesting that the amount of work needed to repair and renovate it would far outstrip any potential monetary gain.

Regardless of what the commission decides, there’s no question that this stretch of Chandler Street in downtown Worcester is about to undergo a massive transformation. Given that Benedict Canyon Equities specializes in multifamily development, the plans that are ultimately proposed will likely revolve around some sort of apartment or condo building. With the former apartment building next door recently acquired by real estate agent partners, this entire swath of Chandler Street could soon be home to the city’s newest residential multifamily buildings. Stay tuned to Boston City Properties for future updates about this project.