If you have been thinking about renting an apartment at 145 Front Street in downtown Worcester, you may be out of luck for the time being. According to NJ-based Mack-Cali Realty Corp., the parent company of developer Roseland Residential Trust, the 365-unit development is now 99.5-percent leased. The developer made the announcement in its second-quarter earnings report for 2019, and the news has made a big splash in the world of Worcester real estate. As always, WorcesterRealEstate.com here to bring you the latest regarding this project and others throughout the Greater Boston region.

Located at the former site of the Worcester Center Galleria, 145 Front Street at City Square, as the development is officially known, is the first newly built residential development of its kind in the city in several decades. Situated as it is in the heart of downtown, the development promises to provide convenient city living without the sky-high Boston rent prices. Still, the price for a studio apartment here – around $1,500 per month currently – doesn’t exactly qualify the place as being “affordable.” Even so, it appears that enough interest has been generated to have filled the five-story building nearly to capacity as of October 1, 2019. 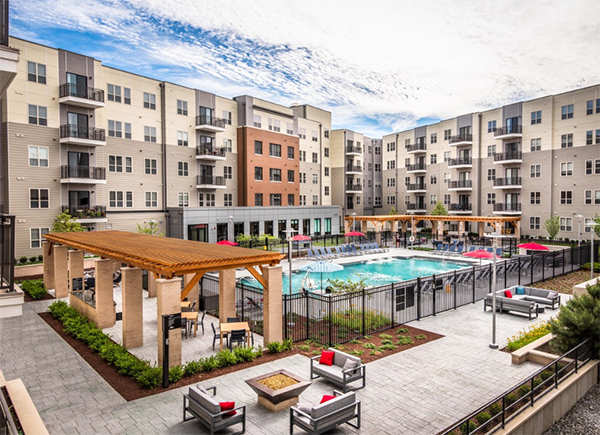 Although leasing has finally concluded on the development, construction of the $97-million project was completed back in the summer of 2018. Leasing began right away, but it has taken this long for the entire building and every unit in it to be claimed. Indeed, leasing of the building started out slowly at first; in October 2018, for example – four months into the leasing period – only 48.8 percent of units had been rented. By the middle of February, according to the developer, 64.7 percent of apartments had been leased, and the number had climbed to 75.6 percent by the beginning of May.

Because leasing didn’t exactly start out with a bang, the developer was forced to run special promotional offers on social media sites like Facebook to drum up interest. 145 Front Street, a multiphase project in itself, is part of the $565-million City Square project. Ultimately, City Square will include 145 Front Street; the 168-room AC Hotel; and a selection of retail, restaurant and office space. Therefore, there is a lot going on in this part of the city. To minimize confusion and generate interest, the developer offered perks on social media, including two months’ worth of rent-free living for new tenants.

So, what do you get if you are able to secure an apartment at 145 Front Street? The development has clearly been designed with popular luxury apartment buildings in Boston in mind, but it doesn’t quite pull out all of the stops. For one thing, garage parking is not included; if you’d like it, you will pay an extra $150 per month. A maximum of two pets is permitted, with cat rent costing an extra $35 per month per cat and dog rent costing an extra $60 per month per dog.

If you are a pet owner, however, you’ll be happy to know that 145 Front Street offers a host of pet amenities, including a pet play area. The premises also includes a first-rate fitness center with a yoga studio; gaming tables; a sports lounge; an on-site concierge; a resort-style swimming pool; and electric car charging stations. Studios start at $1,460 per month, one-bedroom units start at $1,650 per month and two-bedroom apartments start at $2,200 per month. Most units have terraces or balconies, which is a nice touch, and all units have their own washers and dryers.

It may be too late at the moment to secure a new apartment at 145 Front Street in Worcester, but you aren’t out of luck if you need to rent a place somewhere in that area. WorcesterRealEstate.com has you covered – just sign up now for instant, free, unlimited access to our searchable online database of MA real estate and rental listings. Limit your search to Worcester or to the city, town or neighborhood of your choice to zero in on suitable options more quickly. When you’re ready, contact us to be connected with a local real estate agent who can take you to look at apartments and more.