These days, it’s getting more and more difficult to stay abreast of the latest real estate developments in Worcester, as the city’s market continues to rise in prominence. On Friday, October 4, construction officially began on the new $80-million academic building at Worcester Polytechnic Institute, which will be located between the Gordon Library and Boynton Street. This comes just one year after WPI opened the $49-million Foisie Innovation Studio and Messenger Hall, so the school continues to expand its presence in the city. Boston City Properties is here to bring you the latest.

The new building, which has not been officially named yet, will include research, academic and student services space. At around 100,000 square feet in size, the building has been envisioned as the place where researchers and educators from WPI can work with their partners in government, industry and academia. Plans call for the building to open in January 2022. When it does, it will house faculty offices and the student services center. The latter will include academic advising, the offices of the registrar, career development services and disability services. 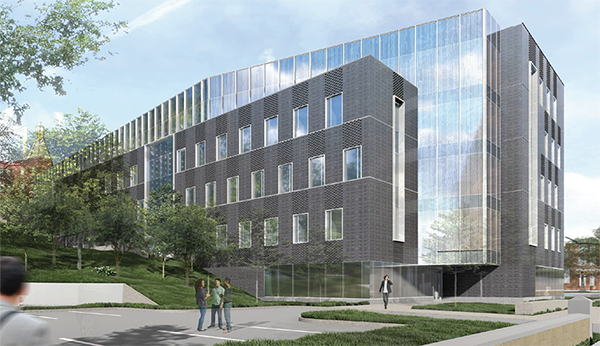 Designed by Boston-based architectural firm Gensler and built by Milford-based Consigli Construction, the building is replacing a parking lot that has existed between the library and Boynton Street for many years. Reportedly, WPI will seek LEED certification for the building, which means that the building will be designed to be eco-friendly and sustainable.

Many contributions were made to help WPI afford the high price tag for the new building. In particular, a seven-figure gift from George and Karen Oliver has proved to be instrumental in the progression of the project. Like his wife, George Oliver is an alumnus of WPI. He is currently the chairman and CEO of Johnson Controls International in Wisconsin and also serves as a WPI trustee. Meanwhile, Karen Oliver leads the Women’s Impact Network Executive Committee, the philanthropic arm of the school. The couple was also involved in the development of the Foisie Innovation Studio that opened last year; its Oliver Active Learning Classroom is named in their honor.

This expansion of WPI suggests that Worcester can expect its student population to grow even more. It could also mean the addition of many new jobs to the area. More than anything, it suggests that real estate in the area is poised to explode.